Kai has been a stalwart on the food scene in Galway since it first opened its doors in 2011. Chef Jess Murphy and husband David have formed a formidable cook and front of house team in this renovated house on Sea Road and have been part of something of a food revolution taking over the city in recent years. 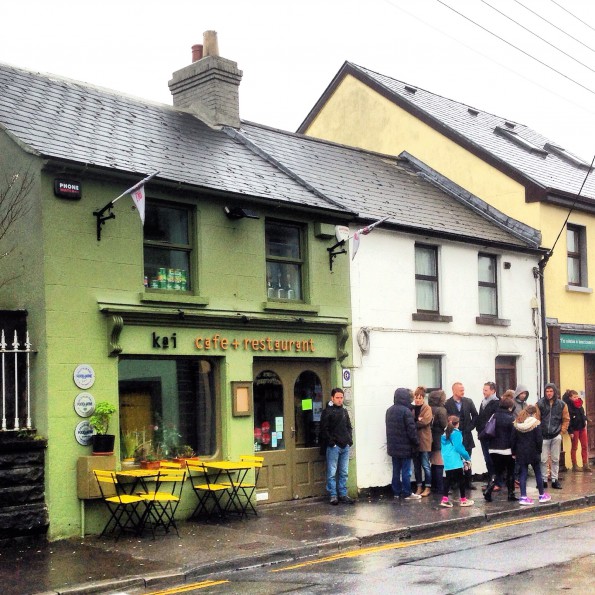 Queueing outside Kai before its opening at 12

Galway has always been an eclectic city, brimming with passionate artistic types, who were and continue to be creative and hardworking in so many spheres from poetry to music. Surprisingly for years though it was always that step behind when it came to food. Sure, there were many fine establishments but many benefitted from falling into the “sure isn’t it grand” category and were never forced to grow up. Galway, however, soon grew up. As soon as it realised what it could have, and with expectations raised, many were dragged into that culture of what I believe was always there, but one that the people had never demanded before. The décor funky and eclectic, Kai was hipster before we even knew what that was. It was, for me, along with EatGalway through Cava, Aniar, and Eat @ Massimo, responsible in raising the bar in food standards and service in Galway, dragging others to either follow or fall. There have been many others since of course but personally, these were the catalyst of that change. 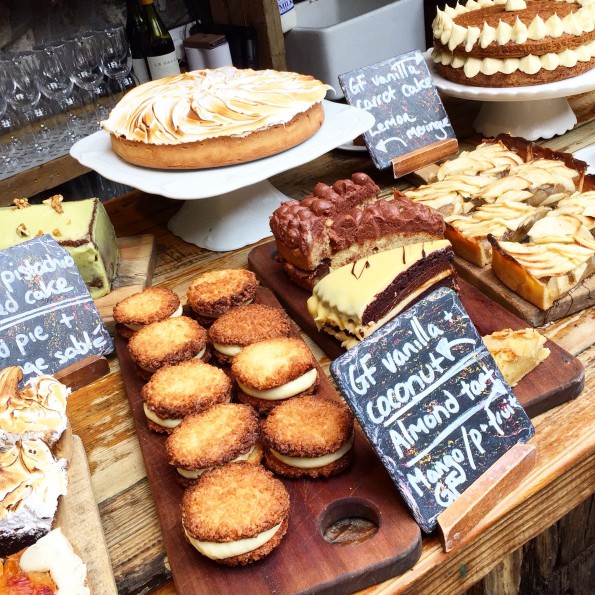 Selection of cakes and sweet treats at Kai

However, with so many other reviews I wanted to look at perhaps something a little different; the phenomenon of “brunch”. Though originating in the late 19th century, it has become hugely popular in a time of recognising the lazy weekend in the midst of hectic working weeks. It has also come to acknowledge the great breakfast cultures of both home and abroad, from fluffy American pancakes to the wonders of the fry.

Kai takes all this on board, puts it in a pot with their philosophy of good, seasonal food, adds a pinch of creative flair, and throws it up on their blackboard in chalk, ready to be wiped away as the food disappears from the kitchen. They have been serving Sunday brunch for years now (perhaps the best in Galway) and though not new, having been for brunch here 3 times already in the year of 2016, I feel a certain qualification on speaking about it. Their menu, though relatively consistent, throws up a few surprises while maintaining the essential elements of what makes the central dish great. 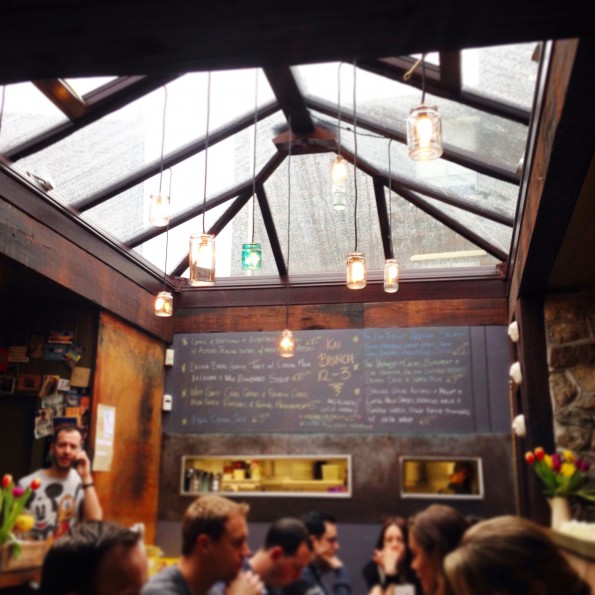 The first time I was here was for my birthday in January. Ever so slightly hungover on wine from the previous evening’s festivities, and as a result confused by the world, I decided to be “good”. On my birthday. I choose the millet and lentil hash cakes, spiced smashed avocado, braised kale, whipped feta, poached eggs. This is a delicious dish, with excellent texture, crispy from the fried lentils and yet smooth and creamy from the avocado and feta. The kale and eggs provide that iron richness that balances everything. On any day this is a superb plate of food, ticking all the boxes in terms of texture, taste, and flavour. However, if there is ever a time to be “not good” it’s on your birthday. I had made a mistake and there was no going back. How could I forget that calories don’t count on your birthday? The “menu envy” was strong that day. 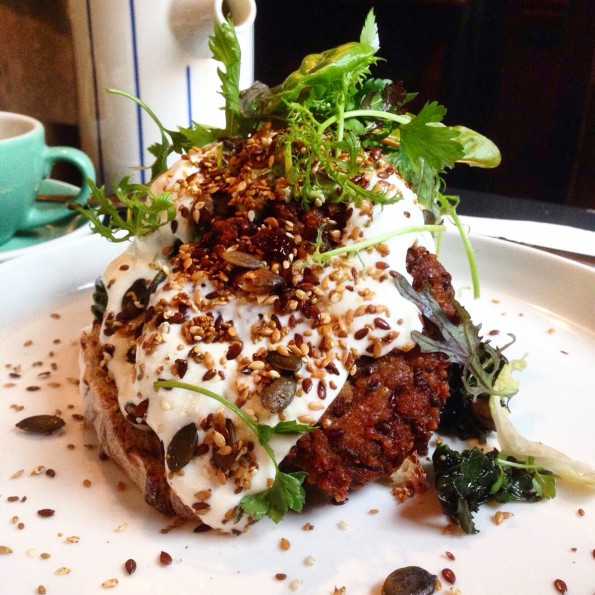 On my second visit I made no such mistake and without falter ordered the “Kai Fry” containing sausage, bacon, kale, homemade baked beans, fried spuds, free range poached eggs, and brown bread. A fry is a seriously exposed dish, everyone knows what one tastes like, and so it becomes about the quality of the ingredients that sets one apart from another. Herterich’s sausages and bacon are excellent products, the eggs are cooked to perfection, but for something different it’s the homemade baked beans that are the star here. Presented in their own cast iron serving dish, al dente butter beans (that perhaps would have benefited from a little longer cooking) are smothered in a delicious ketchup-of-sorts with a more than hint of smoked paprika synonymous with patatas bravas sauce. Mopped up with the generously buttered brown bread, I was left most happy and so will you if you try it. 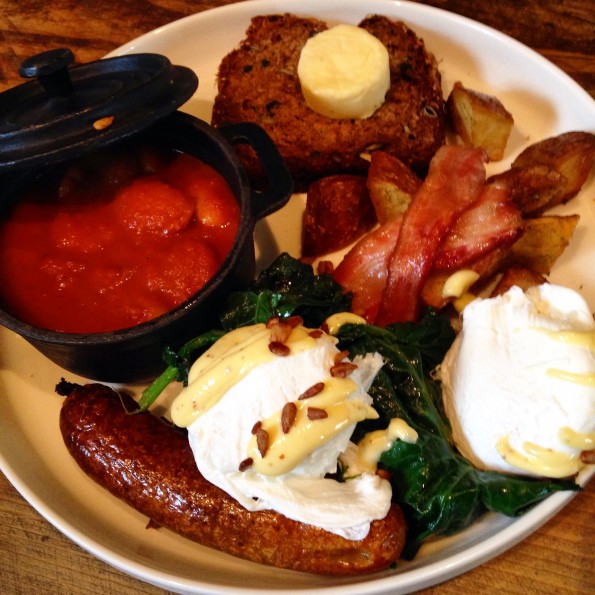 On this occasion my companions ordered the west coast Connemara and Parmesan crab cakes, rainbow chard, free range poached eggs, celeriac remoulade, all served with lashings of Sunday sauce. This is a large portion and generously afforded with crabmeat. Although cheese served with seafood is a contentious issue, it acts more as a seasoning here. The remoulade, which generally is a dressing of mayonnaise with added vinegar, capers, and shallots, provides the acidic element of the dish to help balance the flavours. Chard is a leafy green, comparable with spinach, and the subtle bitterness rounds out the flavours and tastes.

The pancakes have been sampled on a few occasions, and though not ordered by myself, I have had the good fortune of tasting. Fluffy and light, American style pancakes with peanut brittle butter, apple, maple syrup. Or on the other occasion; Lemon and poppyseed buttermilk pancakes with almond praline butter and maple roasted apples. These are delicious pancakes and most generous in portion. The peanut brittle butter is fantastic and delivers a salty note in complimentary contrast to the overt sweetness of the baked apples. However, my husband John informed me, that with 3 large pancakes, the ratio of topping to pancake was askew and needed more of the former. Is it up to the diner to ask for more maple syrup or should the kitchen have the balance of a dish perfected? Excellent and delicious pancakes regardless. Add bacon for €2.50 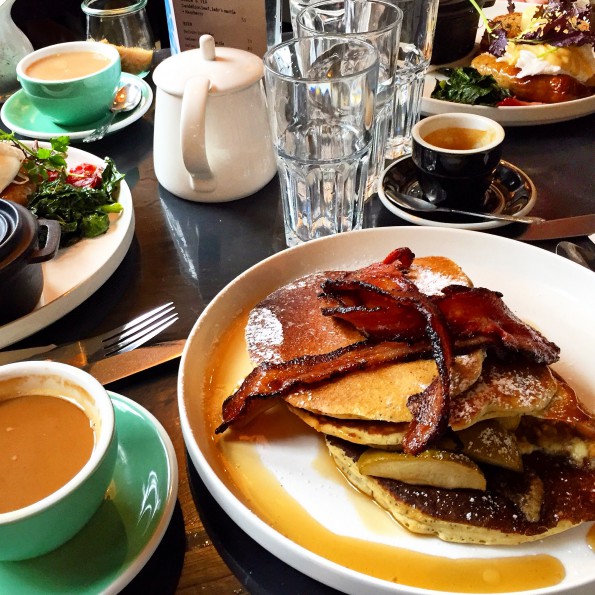 On my most recent visit I decided to share two dishes with my sister, a main and dessert, or savoury and sweet. We ordered the Kai Fry as she had never tried it and the Banana Bread French Toast for “dessert”. I’m already a huge fan of banana bread and its rich toffee-like sweetness so the idea of it turned into French toast warmed my heart. Or maybe that was the cholesterol. But it’s Sunday; calories don’t count today. Or your birthday. So if your birthday happens to fall on a Sunday, you’re essentially eating air. I’ll let the picture of the banana bread speak for itself. 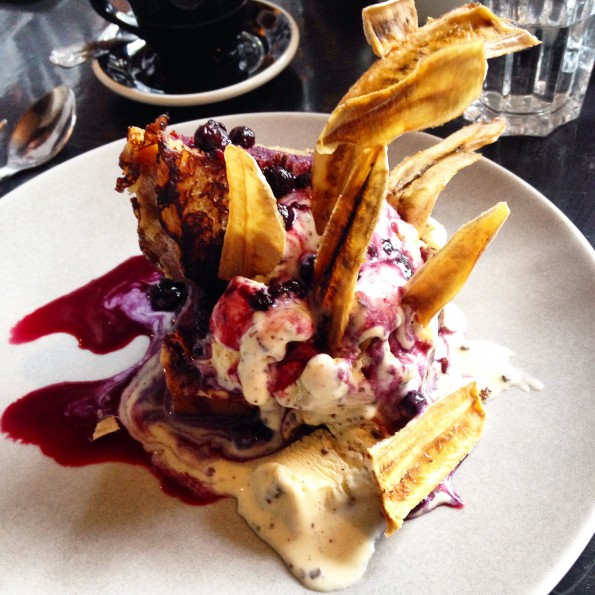 On all occasions the service was attentive, efficient, and smart. On the most recent occasion a simple look to the waitress communicated the end of our fry and the hope of imminent French toast banana bread, which promptly arrived. This is the sort of excellent service that comes with experience and a care for the customer. Both are hugely evident in Kai. The coffee is also superb, though with Galway also going through a coffee revolution this is to be expected if not politely demanded in an establishment with such good food.

Word of warning: Kai now has a reputation of a go-to Sunday brunch spot. If you fancy that make sure you have the proclivity to queue. Opening at 12 and finished at 3, you need to be here by at least 11.45 and queue to guarantee a spot. 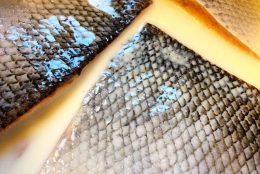 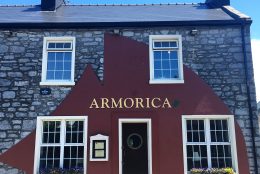 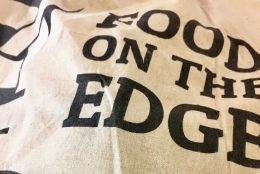